The writing journey continues… it’s been one week since Daughter, Disappeared was published; a dream-come-true week for a new Indie Author!

Thank you to everyone who has bought an ebook or ordered a paperback – I’m overwhelmed at the response to my adverts. 113 ebooks were sold in the first week and a further 4,590 pages were read via Kindle Unlimited, equivalent to 15 books. I don’t have stats yet for the paperbacks but the only blot on the landscape has been the ‘temporarily out of stock’ message Amazon has on the page. Apparently it’s because it’s a new title and the message should be removed soon. The paperback is still orderable and I’m grateful to all the people who have messaged me to say they’ve placed a request.

One of the highlights of the week has been making connections with other women across the UK with Tunisian connections like myself: it’s lovely to be in touch with people with similar life experiences and it was those experiences that inspired me to write the book.

Another highlight has been the super-fast readers who have already finished the book and given me some amazing feedback! It’s a funny but nice feeling to know that both friends and strangers are reading the words I poured over for so many years.

I’d like to say a special massive thank you to those who have left reviews on Amazon – this is so appreciated and hugely valuable for an Indie Author without access to all the resources of a traditional publisher. If anyone would like to do so, even a brief one-line review would be very helpful:

I’m off to finalise the next story – another thriller for women but this time set on the west coast of Scotland. Hopefully it’ll be available in January 2017. And then I’ll catch up with my housework…! 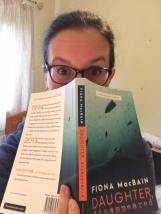