I was excited and hopeful to be one of six authors picked to pitch my second novel to a panel of literary agents at the London Book Fair.

My flight was delayed by three hours (initially due to fog, then a medical emergency that required an ill passenger and his luggage to be taken off the plane, then a broken door which required an on-call engineer to be summoned – a veritable catalogue of air-craft related issues) so I had a mad and expensive dash across London in a taxi and sprinted into Olympia at 1.55pm for a 2pm start. I hadn’t eaten or pee’d for hours, or even had time to look in a mirror and put some fresh make up on my flushed, perspiring face. I discovered the Book Fair is the size of a village, as a ordnance-survey sized map was thrust into my hands, and I stared, bemused and panic-stricken, at the colour-coded areas and obscure place names – Level 2, Stand 34H729 etc. What the fuck? I was so frazzled, my brain wasn’t functioning as I went up to someone in a ‘here to help’ T-shirt, showed them my speaker badge and explained I had two minutes to get to my event, trying not to burst into tears.

I was last to pitch and my heart sank as I listened to the other authors pitching to the four agents and the audience of, I’d guess, around 200 people. Their books sounded amazing and several of them spoke without notes, which left me gasping in admiration. It was interesting to listen to the feedback on their books, although some of the agent suggestions left me puzzled. Several were pretty radical.

I have spoken in public before but this was the largest crowd I’ve addressed and my heart was thumping when I stood to speak, not least because I was presenting something so personal; the culmination of years of hard work. I found it very difficult.

I read my pitch and listened to the comments. It was interesting to hear the advice from the agents, representatives of the traditional publishing industry, although it made me smile that we were pitching in the hope of a publishing contract, right beneath a gigantic sign of the Book Fair’s sponsors which read ‘Kindle Direct Publishing: Self-Publish in Digital and Print.’ 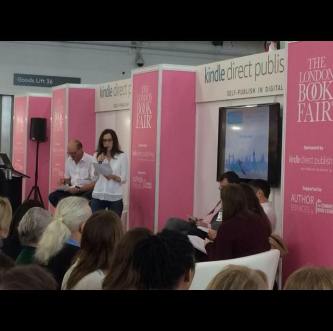 KDP all the way! Yes, my final conclusion from the event was that self-publishing was definitely still for me. Partly because I didn’t win (the agents chose a winner who then got to pick which agent they would work with, dragon’s den style), and partly because the whole experience, while valuable and fun, had reminded me of the awful cycle of hope and disappointment that comes from submitting your work to agents and publishers.

Self-publishing isn’t easy – it’s time consuming, bewildering and expensive – but you are in control of your book and what happens to it. You have a sense of being in direct contact with your readers, and you don’t have to spend months and months waiting in the vague hope of a reply, a crumb of encouragement in the form of nothing more than a non-standard rejection.

I felt down after the event; my confidence in my book had been dented. Two of the agents did not like my title (which is the name of the fictitious town where the book is set) as they felt it was too enigmatic, and they did not like my five female characters having equal prominence in the story. They said a book had to have one main character, with the others being subsidiary.

I’m not sure I agree with them on those points but even if I did, it’s too late. I have spent over £1,600 on professional editing, copy editing and design. To fundamentally change the character focus of the book would require it to be re-edited and I simply can’t afford to (even if I wanted to, which I don’t). The cover has already been designed by Reedsy Designer Mark Thomas (https://reedsy.com/mark-thomas) around the title and I’m delighted with it – it’s eye catching and unique. There is no way I want or can afford to have a new cover designed. And anyway, I LIKE my title. So there! Lol.

The criticism also made me reflect on another fear I have, as publication of Book 2 looms closer. What if people don’t like it? My first book, Daughter, Disappeared has received better feedback than I ever expected, but now I’m feeling the pressure for the follow up, which is different in style and tone.

I’ll take advice from Andy Warhol: ‘Don’t think about making art, just get it done. Let everyone else decide if it’s good or bad, whether they love it or hate it. While they are deciding, make even more art.”

So… GLASDRUM is coming soon… watch this space…

*runs to get a stiff drink*

If you enjoyed this, take a look at my debut novel, Daughter, Disappeared, a hard-hitting ‘women in jeopardy’ thriller, set in Tunisia. Please read the reviews on Amazon: http://amzn.to/2eCnZRf 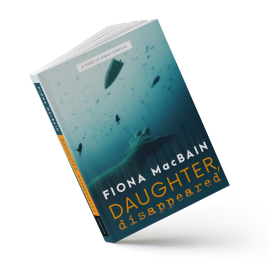