This post might be of interest to fellow Indie Authors who are wondering how to use facebook adverts, although bear in mind I’m a complete novice just guessing my way through it. If you are an expert, please feel free to leave any tips!

I’ve been selling my books for almost a year now (I self-published my debut novel on 4 November 2016) and almost all my sales have been via facebook using boosted posts. The targeting worked brilliantly, sales have been better than expected, and I’ve got a fair number of reviews (last count was 80 and 67 on Amazon for Daughter, Disappeared and Glasdrum respectively).

Over the last year I’ve taken a look at Facebook’s advert manager a few times and other than using it to create audiences, I’ve recoiled in horror from its complexity. It’s a minefield of things I don’t understand.

However my book sales have been dwindling to almost nothing because I haven’t been advertising, so I’m going to run a 99p ebook campaign for Glasdrum from 28 Oct to 2 Nov 2017, and will spend a bit of money to advertise it. The cost of advertising will cancel out any profit from the book sales but breaking even is as good as it gets. Thank goodness I’m not trying to get rich from this… *thoughtful face*.

Anyway, I have spent the last few mornings crawling out of bed at the crack of dawn to try to get my head around Advert Manager. It’s horribly complicated and there are loads of things I ignored because I had no idea what they meant. But… after many attempts, I have at last managed to create an advert – and it even has a little video WITH MUSIC! I feel like a techno whizz-kid.

Whether it brings results is still to be seen, but one advantage is that the tracking options for ‘proper’ adverts are more comprehensive (although equally complicated). Other than the tracking, I suspect the boosted post option, which is a hundred times easier, might be just as productive. I’ve noticed informal posts seem to be more popular on facebook than slick adverts (no need to worry there, my advert is FAR from slick, lol), so by way of an experiment, I’m going to split my budget in two.

I’ll use the same images that are in my advert in a straightforward boosted post, use the same audience, and allocate the same amount of money – and see which post gets the most engagement, the ‘advert’ or the ‘boosted post’. I will report the results in due course! I’d be interested to hear what others find works best, or from the facebook user’s perspective, which is the least annoying?! 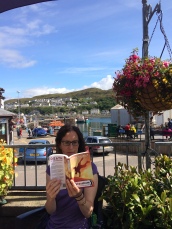