It’s surprisingly easy to write a book. Think up a story line, a few characters, and off you go. 1,000 words a day for 80 days and it’s done. Even if you only manage 500 words a day, you’ll have an average-sized novel in 160 days. Six months. Not long.

Like many things, writing a book is not as easy as it appears. My first draft of Escape from Tunisia took about a year. I wrote it while my youngest was at playgroup, racing home to ignore the unwashed breakfast dishes and unhoovered floor to write for two hours, three times a week. I also wrote a lot of my first draft in the Sports Centre café in the evening while my eldest was at Athletics.

When that wasn’t enough time, I started getting up at 5am several times a week. But I didn’t compensate by going to bed any earlier and in addition to becoming a pale, weepy wreck, I made myself ill.

However, I finished my first draft and sent my newborn book for an editorial report. I awaited the feedback with great excitement, wondering if they might even recommend me to a publisher!

I got back ten pages of relentless brutal criticism. It started with ‘I hate your title’ then methodically worked its way through every aspect of the book. I was devastated.

The only glimmer of hope was that it didn’t advise me to give up. Re-writing was the way to go. So that’s what I did. I started again and re-wrote it with a different chronological structure and more considered characters. Then I changed my mind and re-wrote the entire manuscript a third time with another structure. With each re-write I was learning the craft, improving my dialogue, removing adverbs and repetitions, using fewer but better words.

I dug into my savings and paid for a more comprehensive report, waiting for it this time with my heart in my mouth and a sick feeling of dread in my stomach. I received twenty-six pages of criticism and suggested edits, but nowhere near as devastating as the first one. There were lots of positives and much of the report contained ideas for improvement. The editor was encouraging and even phoned me to talk me through some of her ideas; I felt so grateful for her input.

I re-drafted the book a fourth time, and edited out 7,500 unnecessary words.  It was getting into good shape. Then, out of the blue, I couldn’t bear to read another word of it and despite all my work on it, I set it aside and got on with a different book, a Scottish murder mystery.

18 months later I’d completed two drafts of the murder mystery and received some positive feedback on it. I’m a much better writer now than I was at the start of the first novel.

So I went back to Escape from Tunisia and looked at it again; it was like meeting a group of wonderful old friends. I love my characters, even my villains. I was pleased with the plot, too. I reread it and felt excited by the drama – it’s exactly the kind of book I like to read myself! I’d buy that, I thought…

So I spent some time fine-tuning it. I reduced the word count by another 2,500 words. I renamed it. And I decided to self-publish it.

But the one constant piece of advice offered to indie authors is to get a professional editor. It’s mind-bogglingly expensive but even the best author in the world can’t edit their own writing.

I got some quotes and hummed and hawed over them for a while. It’s a lot of money to spend and I had no way of knowing who to pick – they all had considerable experience.

In the end I picked the one I thought I’d get on best with – she sounds enthusiastic and gave me several good ideas based on the small sample I sent.

I know there’s going to be considerable work to be done but I feel as though I’ve taken one major step closer to being published. Next stop: a book cover! Watch this space… 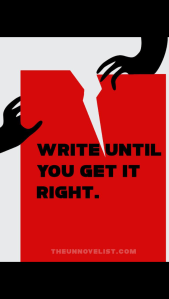