Ben MacDui, Britain’s second highest peak, was shrouded in mist when my fourteen year old daughter and I set off to climb it.

The weather couldn’t have been worse: winds of 60mph were forecast in the afternoon, meaning the summit was likely to be a bit dangerous (‘exciting’), it was raining and the mist was so heavy we could barely see five metres in front of us. ‘What jolly good fun,’ I said with a cheesy grin, as we plodded upwards though the dense cloud. The teenager didn’t appreciate the humour.

I was pondering the sense of our trip when I became aware of a lone man walking behind us. He had caught up but wasn’t overtaking and it made me feel a little uncomfortable.

‘Let’s stop for a rest,’ I said, and we sat on a boulder to allow the man to carry on ahead of us before we set off again.

But only another fifty metres further on we came across the same man, who had stopped at the side of the path. I couldn’t get a proper look at him due to his hood and the zipped up coat that covered most of his face and I couldn’t believe it when, after passing him, he got up and started following us again. Feeling uneasy, I checked my phone. ‘No service’.

My daughter and I paused again to let the man proceed and this time waited quite a while to allow him to get far ahead of us. I became quite terrified when we soon came upon him waiting at the side of the path, again following us after we had passed. This was a popular hill walk, but apart from a group of fast walkers who had overtaken us on the lower slopes, the poor weather had kept most people away.

By this time we were crossing a plateau that ran above the Lairig Ghru; a mountain pass that cuts through the Cairngorm mountain range, with steep cliffs that fell away from the Ben MacDui path.

The man was about ten metres behind us. Was he getting closer, or was I imagining it? I turned to look and he lowered his head when I caught his eye. I glanced at my daughter and regretted taking her up the hill in such poor weather, leaving us vulnerable to strange men in a remote location with no phone signal and no means of seeking help.

My imagination took control as I looked at the edge of the nearby cliff, the ground below lost from sight in the swirling mist. What if he was a crazed killer who had stalked us up the mountain and was about to push us both to our death?

‘If he comes near us,’ I said to my daughter, ‘I’ll distract him and you run down the hill, okay?’

‘He’s following us,’ I whispered.

My daughter is brave and logical. I had to admit it seemed the sensible thing to do.

We stopped and the man caught up with us. ‘Excuse me,’ he said.

Seemed quite polite for a killer, I thought, but maybe he was lulling us into a false sense of security. I nodded at my daughter to be ready to make her way down the mountain and she rolled her eyes.

The man continued: ‘I hope you don’t mind me sticking so close by but I’m not a very experienced walker and am worried about losing my way in the mist. I presumed you must know where you’re going.’ He lowered his hood as the rain had stopped by then and I realised he was probably over eighty, with a shock of white hair and a kind face. Definitely not a Mist Murderer… but he could have been. 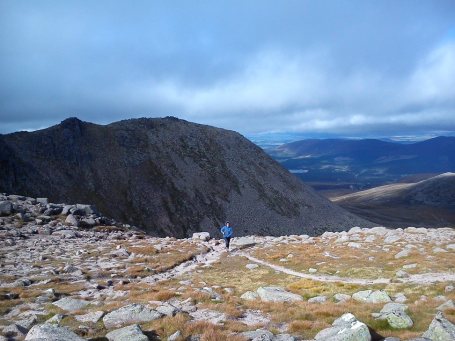 My daughter crossing from Ben MacDui to Cairngorm, when the mist lifted and the steep drops were revealed.

To read more about the Mist Murderer in the thriller GLASDRUM (One town. Five women. Dark events), here is the link to it: http://amzn.to/2o0dnnI.

3 thoughts on “Glasdrum: The Mist Murderer”