I tried to write Book 3 as one document, simply because combining the chapters for the other two books had seemed huge tasks at the time (it really hadn’t been, maybe it had been the last straw at the end of a long process).

But around about the 20k word mark of Book 3, the document was becoming unmanageable and doing my head in so I split it into chapter documents, which was like a weight being lifted off my shoulders. But having the manuscript in separate documents forced me to stop counting words, and since then I’ve had the feeling I’ve been deleting more than I’ve been writing. But I just added up all the word counts from the ten chapters I’ve finished so far and have written 31,907 words which I’m super chuffed about. I’ve also solved a lot of plot issues that were slowing me down and have been hammering the words down for the last few days.

Another thing that had slowed me when I started the new book was that I had spent so long prior to that editing the other two, I was out of the way of writing with no thought for grammar, sentence structure or length etc. There are some writers who can ‘get it right first time’ but I’m not one of them. If I get bogged down into trying to write well, I can get stuck on one sentence for an hour and forget what the purpose of a scene was. I’m back into a ‘writing with wild abandon’ frame of mind, which is a lot more fun than the torture of editing. This is my favourite bit of the process, the part I’ve enjoyed about each book. The scene is set, the characters have sprung to life, I know roughly where the story is going, and I’m enjoying finding out what is going to happen.

Both my other books are 78k words (within a couple of hundred words of one another) so I’m aiming for 90k words of a first draft for this book, so I can slash and burn them at the end. Unless this story turns out to be a bit longer, who knows?!

This means I’m a third of the way through the first draft, and with a huge amount of effort, and since I now know where I’m going with the plot and have a strong grasp on all my characters, I think cautiously I might finish first draft by the end of January 2018.

Some other word counts, just for fun:

Recent self-published novels (Reedsy is an online marketplace for Indie Authors to find professionals and is how I sourced my editor and cover designer (https://reedsy.com/mark-thomas): 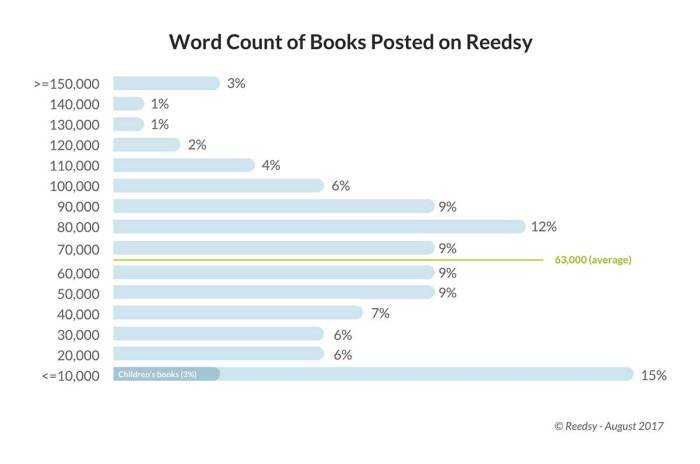 The genius of JK Rowling: my son read all of these when he was only 8 – how can you write so well to keep the attention of an 8-year old boy for 257,045 words! Amazing.