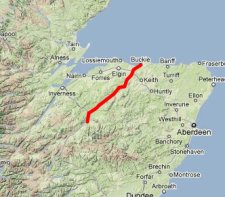 I keep getting achy neck muscles and a slight headache, and think I’m coming down with something. Then I remember it’s because I’ve been walking (sometimes running) the streets of Inverness with a rucksack full of books on my back.

It’s practice for solo-trekking the 65-mile Speyside Way from Buckie to Aviemore as soon as the evenings are lighter and the nights milder. I aim to do it over two days and sleep over-night in a bivi bag. It’s part of a longer term plan to walk the Cape Wrath trail (234 miles, gulp) which starts in Fort William and goes up the north west coast of Scotland. (This is waaaaay in the hazy future).

The main problems are: I get a sore neck when I carry a rucksack for any length of time, I don’t like camping, and I’m petrified of the dark.

I was brought up in the countryside (no streetlights, pitch dark) and used to be sent to close the garage door at the end of the day. I remember feeling very exposed as I would reach up to grab the pull-down door. In my imagination a murderer or monster was always hiding in the shadows of the garage and I would race back to the house with my heart hammering. Disorganised camping as a teenager, involving discussion of recently watched horror films, and 3am stumbles around an ancient graveyard (‘it’ll be funny’), cemented my terror of being surrounded by dark woods.

Anyway…I’m now forty-five and still hate being in the pitch dark. I feel a tight sense of panic in my chest which I know is irrational.

So I decided it was time to do something about that fear, and at the same time get cracking on my long-harboured, long-distance walking ambitions. Sleeping on my own in the countryside in a bivi bag will either kill or cure me.

But …the midges…and other wildlife – sheep and cattle roam freely in some parts of the Highlands. And there could be foxes, pine martins, werewolves, serial killers…

There are also several B&Bs along the route. I have them saved on my favourites bar, alongside the links to the outdoor equipment shops.

2 thoughts on “Speyside Way 1 – Afraid of the Dark”