One of the biggest personalities I’ve ever met was my husband’s cat Chichi.

When I first started staying over at Alister’s house, Chichi would stretch out in the hall and hiss and lash out at me when I walked past. What a horrible cat, I thought, but kept it to myself, having seen how devoted my future husband was to this gigantic black and white tom. His timid rescued dog, Bart, received the same treatment from Chichi – random swipes to keep him in order. Chichi was definitely the king of that castle. And as I was allergic to cats, whenever I stayed over, he was banned from his usual sleeping place beside Alister’s head and shut out of the bedroom – no wonder he hated me.

We decided to move in together and were packing up Aliser’s house one Saturday when my daughter came running in. ‘Chichi’s caught a bird and it’s got red on it.’

Blood we presumed, as we ran outside. Chichi was quite a hunter – half-dead birds, mice and baby rabbits were regularly deposited on the living room floor. Sometimes Chichi gorged himself on his kill then regurgitated the animal’s remains all ove

r the floor. But this time he had excelled himself: a green and red parakeet lay dead on the lawn beside him, a metal identity tag around its leg. Oh dear…someone, somewhere, shouldn’t have left a cage door open…

Chichi’s attitude towards me changed when we moved into our new house. He was a clever cat and must have sensed I now had as much right to be there as he did. But poor Bart was still bottom of the heap: we bought new beds for them, but Chichi often chased Bart out of his and took the bigger of the beds for himself. 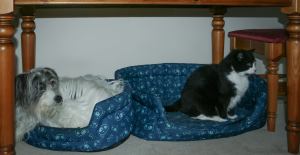 One thing Chichi loved about our new home was when my eight-year old daughter’s friends came round – he craved attention and liked nothing better than getting passed around a group of noisy children. His sister Mingming was a different type of cat; shy and nervous she kept as far away from kids as possible. Once the oldest of our two baby boys started crawling, Mingming, who had been startled by their shrieking and crying from the moment they were born, packed her bags and moved in with our next door neighbour, where she lived happily until her death.

Chichi ruled the roost, infuriating us every evening – every time we would sit down he would yowl persistently for us to get back up and let him out, then scratch noisily at the back door, up on his hind legs, to be let back in again.

When he was about fifteen, he was diagnosed with diabetes and would have to get twice daily injections of insulin. We thought he’d die – what cat was going to tolerate having a needle jabbed into him morning and night? But we were astonished that Chichi seemed to enjoy it. He sought out his injections. Once or twice I phoned Alister at work because Chichi was sitting beside the fridge meowing – and sure enough, it was because he’d forgotten to give him his jab.

We were all heart broken when Chichi died, age seventeen. We still have the scratch marks on our back door to remember him by.