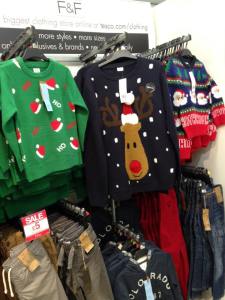 But I wonder how much Tesco, Asda, Primark, Matalan, Next etc made from it in additional jumper sales.

Pupils were told that on the day of the school fair, they could donate £1 and wear a Christmas jumper or decorate their school jumper if they didn’t have a shop-bought Christmas one. Guess which option most children choose? On the day of the fair, the vast majority of children and most teachers were wearing shop-bought jumpers. Kaaa-ching – lucky shops!

Could the money spent buying the jumpers have gone to the charity instead? Perhaps the school could have simply done the ‘decorate your own jumper’ option, still raised the money and not obliged anyone to purchase an unnecessary item of clothing? I decided not to buy a Christmas jumper – a decision made easier because I’m blessed/cursed (depending on the occasion) with two boys who hate wearing anything out of the ordinary (they’d plead to wear their worn ninja T-shirts to a wedding). I would probably have crumbled in my principles if they’d made a fuss – but they didn’t. Although I have to confess that I totally forgot to get them to decorate their jumper – it went right out of my mind until after I’d dropped them off and saw photos on facebook of their pals in their Santa sweaters – no Mother of the Year prize for me, I guess.

I have felt the same about the many Dress Up days the school hosts for various charities. While it is great to encourage children to raise money and think about those less fortunate, the school gives little thought to the feasibility of the outfits. We have had Superhero Day, Yellow Day, Pink Day, Spotty Day, Pyjama Day, Tartan Day … Some are relatively easy to source (except the bloody tartan. Even in Scotland, that was a tall order. And, at the risk of sounding gender stereotypical, have you ever tried persuading a five-year old boy to wear pink clothes borrowed from a girl?). On each of those days, I know parents who purchased items of clothing. They didn’t have to, but they did. I felt compelled to buy new pyjamas because my children’s existing ones were threadbare and about two sizes too small for them.

This was fine. They needed new pyjamas and I could afford it.

What about the parents who can’t afford to buy new items of clothing on a whim? Those whose budget is so precarious that another £5 per child would put them into debt at the end of the month? When I asked this question, the school told me that participation was not compulsory – it was just supposed to be ‘for fun’.

But where is the fun for the child who doesn’t have a Christmas jumper, when everyone else does? For the child in their usual uniform when everyone else is running about as Spiderman or Elsa (is she even a superhero?). That very child who might come from a less affluent background and already feel left out of things other children take for granted – swimming lessons, new bikes, being driven to school when it’s raining.

The school can point out to parents that participation is not compulsory but, by arranging these events, they are obliging parents to either spend money – or have their child left out, something every parent dreads for their child.

When my youngest was in nursery, he handed me a slip of paper at the end of one session. It had the name of a star wars book on it, with £4.99 written beside it. ‘What is this?’ I asked the nursery teacher.

‘It’s the book he chose at the Book Fair,’ she said, hastening to add, ‘but you don’t have to buy it.’

No, I don’t have to buy it, but I’ll have to listen to him wailing to me about how much he wants it if I refuse. And who can blame him? If you take me round Waterstones and ask me to choose a book from all the brand new glossy books, and I get all excited about my new novel, and I even have the name of it written down so I can look forward to it, and all my friends say they are also getting new books, I, too, will howl if I’m then told I can’t have it after all.

The Book Fair is a profit-making company that sets up shop in schools, ostensibly to promote reading, when all it encourages is rampant consumerism. I ordered the very same star wars book from the library and had it within a week – but sadly it didn’t arrive until after the nursey had given out the new books at circle time to all the children whose parents had been willing to purchase one, while the unlucky ones with mean or poor parents just sat and watched.

I had already endured seven years of Book Fair angst with my oldest child, so I decided to complain. And I was pleased that the following year there was no Book Fair – they held a Book Swap instead. 50p to exchange a book – what a great idea. The children get a new book, and the school still makes some money. Instead of dress up days, they could hold back-to-front or inside-out or decorate your own jumper days with no separate option for a shop-bought outfit – still fun, still raises some funds, but at no additional cost to anyone, and with easy participation.

And on the matter of ease of participation, as a working parent who often forgets school events even though they are taped to the fridge door, something that’s quick and easily achievable is welcome. No more midnight dashes to Asda to find something cheap and red to make a Little Red Riding Hood cloak for your daughter for World Book Day Come to School as a Character from your Favourite Book – words that strike fear into every parent’s heart.

2 thoughts on “It’s all about the money.”